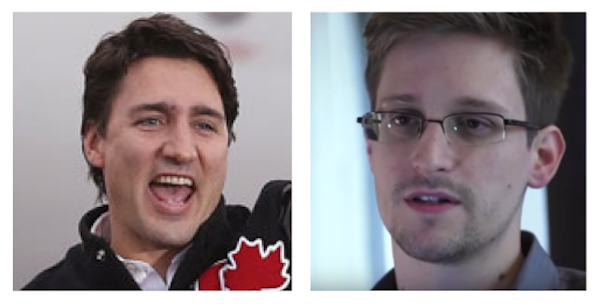 Something fundamentally world changing it would seem.

Eric Snowden is the US National Security Agency whistleblower who gained notoriety in 2013 for leaking information about the NSA and mass surveillance.

Commonalities might seem unlikely. Nevertheless, the pair infused me with hope this week.

Both understand we live in a world where women are as important as men. I know that probably doesn’t come as a surprise to you, but to many others it does. That’s the grim reality of our gender-imbalanced world.

Both these young (relative to me) men gained my admiration when they made a point of making a point about gender parity.

Just as I had been riveted when I watched him speak remotely at TED 2014, I was glued to the screen at Bishop’s Centennial Theatre as he addressed the audience via the Internet from Moscow. His talk was equally fascinating. He spoke for more than hour about living one’s beliefs and values, what it means to pay the price for doing so and why one would choose that route. I was inspired.

I was further impressed during the question period at the end of the session when, after three successive questions from male students, he interrupted the moderator to say he wished to also hear from female members of the audience. His request generated whoops, hollers and applause from many of the women in attendance.

The next day, November 4, 2015, Prime Minister Justin Trudeau announced his cabinet of 30 members. Half of them are women. This shouldn’t be noteworthy, we are 50 per cent of the population after all. It shouldn’t have been an historic moment, but it was.

When asked why he insisted on gender parity in his cabinet, Trudeau said: “Because it’s 2015.”

And yes, it’s about time.