I’m posting it for the first time in January 2021.

Each of us is broken in her own way.

The vintage baby doll is the most visibly so. She had been propped in an antique high chair beside my bed for ages. Not any more. Now, she lays buried in pieces in a Loblaws’ bag under a pile of cashmere sweaters in my closet.

The drawing of two-year-old me (who appears to have no visible scars) hangs on the wall opposite the foot of the bed in “my” room in my mother’s home.

“It may be your room, but it’s my house,” my mother reminds me when I balk at keeping it the way she wants instead of the way I want when I’m “home.”

Mom is eighty-four. She’s broken too. In the early-ish stages of Alzheimer disease. I came back to rural Canada from Dubai to care for her ten months ago, leaving behind my communications consultancy and twenty years of expat living. The strain has begun to take a toll. On both of us.

My wounds (old and new) are as severe as the broken baby doll’s, as invisible as those of my toddler self in the artist’s rendition and as seemingly incurable as my mother’s Alzheimer disease.

How long two-year-old me has been pinned to the wall I’m not sure. I noticed her for the first time a few years ago. She seemed to appear one day out of nowhere. Perhaps she’d been there all along, but I hadn’t seen her, just as I have not been seen.

Once spotted, she became relentlessly present, ever vigilant in the childish observation of her grown-up self. There she is (impassive) when I open my eyes in the morning. There she remains (unblinking) when I close them at night. She may be tethered to the wall, but she follows me around the room that’s mine in the house that’s not whenever I’m in residence. It’s kind of creepy.

Two-year-old me demurs, tight lipped; her azure eyes wide open and unreadable. She’s suspended. Silent. Watchful. Captive in 1957 pastels and a smock-topped dress. To be fair, I haven’t asked her directly why she’s there. Maybe that’s why she doesn’t answer. Or maybe she’s getting me back for having ignored her for so long.

“It’s not my fault. I didn’t see you before I did,” I will say in apology someday. But not today. Today, I’m too bruised to feel sorry for her; I’m too busy feeling sorry for myself.

I’ve just come up from breakfast with Mom and Caroline, the angelic caregiver/companion who is with us from 9 a.m. to 6 p.m. Monday through Friday. I feel a little under the weather. Correction: a lot under the weather. I’m paying the price for having consumed a whole bottle of cheap white wine on my own last night.

Going overboard was prompted by my first therapy session in a decade, which was in turn driven by the stress of caring for Mom while waging war with my brother. Despite having discovered a wellspring of patience I never knew I had, I’ve learned that living with someone who lives with dementia is likely to make one “demented” as well.

I walk into my bedroom. Two-year-old me is stuck on the wall as usual. She has nowhere to go and no one to go with, all her playmates having abandoned her long ago by growing up.

Our eyes haven’t met since I awoke, and I don’t give her a second, or even a first glance. My foggy mind is preoccupied with retrieving the broken doll, and hangovers such as the one I’m suffering can handle only one thought at a time. For some reason the doll surfaced during the previous day’s therapy session. Now I feel strangely compelled to free her from the closet.

Two-year-old me watches fifty-six-year-old me rifle through the protective sweater layers to get at the grocery bag and its captive. I don’t feel two-year-old me’s dispassionate look. I’m focused on uncovering the doll I had stashed in the cupboard when my mother discovered her in pieces mid winter, and blamed me for her brokenness in a plaques-and-tangles-induced rage.

It was a quiet Saturday in February. Mom and I were alone. We had come upstairs after finishing breakfast. Snow fell gently outside. Everything was calm. Until it was not.

“You broke her! She’s mine, and you broke her!” Mom’s words ricocheted from her bedroom to mine, found their mark.

I stopped making my bed and crossed the hall. As I went, I shielded myself in an invisible cloak of equanimity, just as I would shortly protect the broken doll with something more tangible.

“What’s wrong Mom?” I say as I breach her space.

“It’s my baby. She’s broken. Look! Her arms and legs have fallen off!”

I hadn’t broken the doll. Her state of disassembly was the result of having been poorly put together or poorly cared for sometime in the past. The thick, red, inner elastics that had once held her arms, legs and head to her torso were now thin, flaccid and pink. They had decayed over time and finally given way from the unrelenting tension of keeping her intact, whereupon she fell apart. I knew this already, having found her in pieces long before Mom had. I had tried to fix her when I found her, but I had failed.

I wondered in passing how the broken baby got from the antique high chair beside my bed into my mother’s room and onto her bed. Then I remembered not to waste time on trivia. Untold unexplained things happen in Alzheimer households. No point trying to solve the insoluble. Better to let all be revealed in the fullness of time.

Meanwhile, I needed to reduce our joint anxiety, restore peace, and return things to normal, or at least as normal as they could be under the circumstances. That meant getting the broken baby out of my mother’s sight, which is how she ended up in a Loblaw’s grocery bag under a pile of cashmere sweaters in my closet.

Six months later, the doll’s liberation is at hand. I shake her out of the bag. She tumbles like bones out of a diviner’s cup onto my white down duvet. Lying there dismembered and disheveled she looks like she belongs in a low-budget horror movie rather than a sunny August morning. 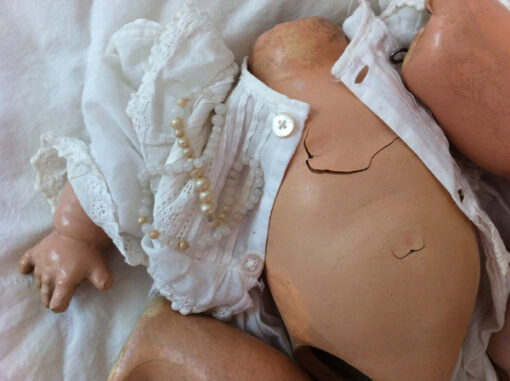 Her belly protrudes through the white christening gown in which her torso and arms are semi-clothed. The gown (borrowed from some long-ago real-life baby) buttons once at the neck and once again at the midriff. But neither of the buttons is holed, leaving the garment to fall open.

The part reveals a crack running across the tiny salt flat of her chest in which her heart would beat if she had one. The crack has been there for a long time, hidden beneath the pleats of her hand-me-down dress. A smaller fracture sits atop her navel; a wider one zigzags from behind her right ear. These too, are old wounds. The amputations caused by the failure of the elastic bands (and my subsequent inability to put things right) are more recent.

I reach down and move the doll’s decapitated head so it lies sideways above her torso, lightening-bolt ear uppermost. Brown painted-on locks crown her face as it reposes in deadpan profile: one rounded cheek toward me, upturned nose and slightly pursed lips aimed at the door. Her eyes are set in cutout sockets. They’re topped with smudges for brows, and they’re closed– eyelids shuttered down, black lashes at rest.

Her hinged lids open automatically when she’s upright, which she was in the high chair beside my bed until she was kidnapped, rescued, and then cloistered. Had she been upright while she was cached in the closet? I hadn’t noticed when I took her out. Even if she weren’t, who could possibly sleep swaddled in a plastic bag? She must be exhausted.

I take a closer look at the quintet of pudgy pieces that would comprise her whole if she were together, which clearly she is not. I feel a little queasy. Is it the physical hangover? Or the emotional one? I’m not sure. I swallow tightly to stop myself from throwing up.

Her chubby little arms remain stuffed in the gown’s lacey sleeves which, because they are miles too long, gather in rolled-up bunches at her shoulders. Equally chubby little hands (with suitably fat fingers) poke through the fabric folds at her sides.

I tug gently on her left arm; it pulls away from her body sans resistance. Below, her legs engage in a pigeon-toed jig inches away from the two holes into which they should fit.

I have an idea. I search for my iPhone. Where the hell is it?

My hangover head cleaves. My stomach heaves. I find the phone under my passport on the dresser. I start taking pictures. Over the course of an hour or so, I take many pictures. Many, many pictures. Some with the white christening gown still partially on and open, most with it off.

The baby is naked and in pieces. She has no choice about her state of disrepair and undress. I arrange her body parts this way and that. Willing or unwilling, she is the victim of my freakish art. She becomes broken-baby-doll pornography. I don’t think about that, or about her at all; I’m more concerned with composition.

I turn around to find two-year-old me watching, the ever-present voyeur. I take her off the wall and carry her over to my makeshift studio. I lean her up against the opposite wall–the one that abuts my bed–in a shaft of sunlight. Her home wall never sees the sun; she’s always in the dark over there. Here, bright summer rays pierce her unprotected eyes. Still, she doesn’t squint.

She really should have sunglasses. This random thought if followed by: Wow, she comes alive in the light. 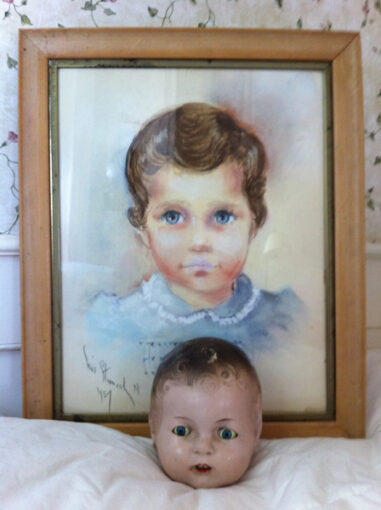 I pick up the doll’s head, and set it in front of the painting.

The broken doll and the little girl in the painting share the same wide-set blue eyes. The same lock of brown hair licks across their foreheads in the same wave. The same baby fat cheeks. The same pursed lips. The same inscrutable expression.

The likeness is more than astonishing. It’s unbelievable. They’re like twins.

I’m jolted out of my hangover haze. My head clears. My stomach settles. All of a sudden, I feel calm, collected, and whole, in a jigsaw puzzle kind of way.

The broken baby doll and two-year-old me, both frozen somehow in then and now, cast blue-eyed stares my way, and I, equally frozen, stare back. None of us move. They can’t and I don’t. I am riveted by what I see. Awareness rises like a tide from somewhere deep inside. Not twins. No. Not twins at all. Triplets. Inextricably tied in some past/present/future way.

It will take a long time, almost a decade, before our collective healing begins in earnest. This first reunion of sorts foreshadows that which is yet to come.