The first thing I see when I wake up every winter morning is fireworks. Silent, silver fireworks produced for no one but me.

They are disguised as a Boston fern.

The fern in question is one of two I have the pleasure of communing with from late October to early May. In spring, summer and fall they live in my three-season back porch. They migrate inside in winter where closer quarters afford me the opportunity to enjoy their show more fully.

One camps out in my bedroom. It sits on top of a small black table that sits on top of my dresser, which sits, in turn, in front of my bedroom window and to the left of the foot of my bed. Before I crawl under my duvet at night, I pull an opaque shade down between the fern and the window to block streetlights and passersby from peering in.

When I open my eyes anytime after dawn, the bedroom Boston is silhouetted against the white shade, which, while it is opaque, is also sufficiently transparent to glow slightly in the morning light. The effect is beautiful: a fireworks of fronds explodes from a pot made invisible by hanging siblings that sweep toward the floor instead of reaching for the rising sun as they did when they were younger shoots. When I arise and open the blind, the greyish fronds turn a hundred shades of green that vary in intensity and sheen depending on whether the day is clad in sun, cloud, snow or sleet. 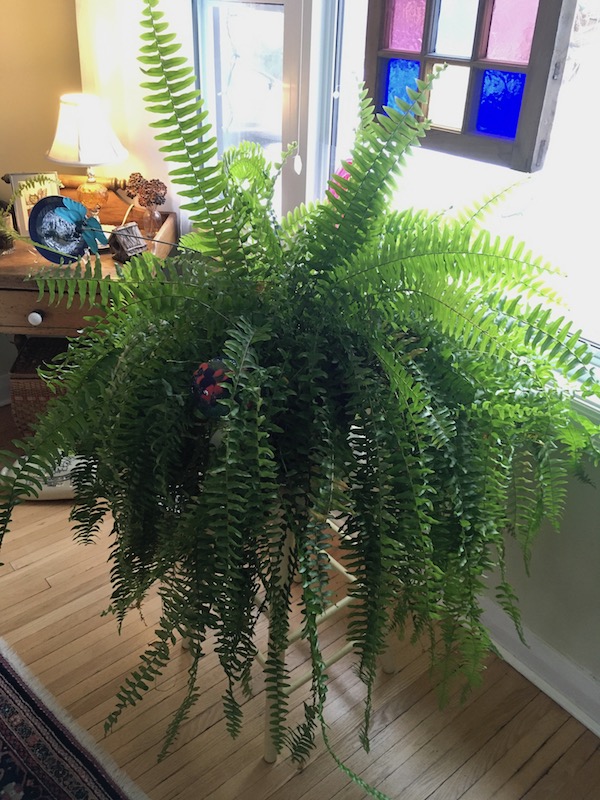 I observe the other fern (it’s in my living room), from the sofa when I write. It perches on a yellow stool I got at my friend Naisi’s antique store a few years ago. The stool is two feet high. The pot from which the living room fern springs is seven and a half inches deep. The tallest upward growing frond is twenty-seven inches long. The tip of the longest downward-sweeping frond hovers six inches from the floor.

When the furnace fires up, hot air from the register on the floor causes the fronds on the right-hand side of the living room fern to wave at me. I sometimes wave back. Experts say one should avoid having hot air blow up the skirt of a Boston fern. But the living room fern doesn’t seem to mind.

That said, the fronds on its right side tend to be shorter than those on its left. Maybe the hot air stunts their growth. Perhaps more waving back would help. I don’t know what the experts say about waving. I shall give more a go. See if it makes a difference.

I could move it. But there’s no other place in my small house that will accommodate the huge living room fern other than the dresser in the bedroom and that spot is already taken. Besides, if I move it I will forfeit the twin joys of its company and having it wave at me while I work.

The ferns are at once static and dynamic. The fireworks they are to me are frozen in the moment. And yet, even in their static state, they reach and stretch, extend and expand, burst and sweep and yearn to further explore the air around them. They know nothing of boundaries or limitations. They’re not held back by thoughts of can’t or won’t or shouldn’t. They just grow. And the space around them embraces them. Holds them. Celebrates them. Savours their feathery touch.

All I have to do is water them and delight in the magic of their being.

© 2021 Susan Macaulay. I invite you to share my poetry and posts widely, but please do not reprint, reblog or copy and paste them in their entirety without my permission. Thank you.

the bell on my bike

i found a quilted heart #ifaqh

don’t put me in a cage