This painting by fine artist and FB friend Don Bruner captured my attention. The subject is the downtown Almonte, Ontario, Canada, the small community in which we both live. But it’s not how our downtown looks now. It’s how Don imagines it might look under different circumstances; he writes:

“View of downtown Almonte titled “What if” which appeared in a dream to me after seeing the coverage of the destruction in Mariupol Ukraine. I had to paint it out.”

It feels to me as if we, and by we I mean everyone everywhere, are living in war zones of one kind or another.

This is not to diminish the unimaginable suffering of people on the ground in places such as Ukraine, Yemen, Afghanistan and many parts of Africa. According to Wikipedia there are currently major wars, wars, minor conflicts, and skirmishes around the world. These are the hotspots: 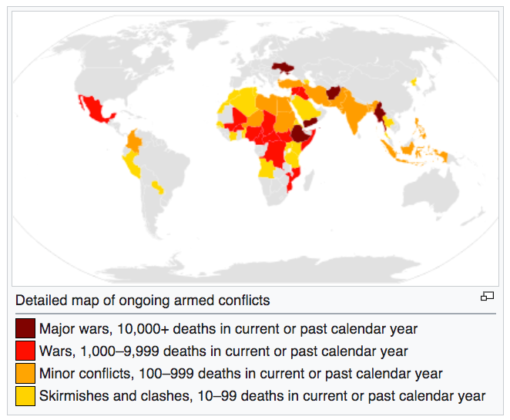 But it strikes me that no one is safe from, or unaffected by, conflict and the dire situation in which we now find ourselves. We are impacted by what happens around us globally as well as locally, even in beloved Canada, which was formerly envied for its relative stability.

This poem is about that.

at home, abroad, unrest and violence
screams and sirens stab the silence

wars and protests in the streets
peace is breaking, none may sleep

meanwhile scores are being killed
with threats on borders now fulfilled

cities bombed and under siege
because some madman is displeased

families torn from one another
children stolen from their mothers

the skies are black, the walls are red
one, then ten, then thousands dead

news is bleak; its hard to know
if one should watch the blow-by-blow

what is real? are facts just fake?
truth slithers by, dressed like a snake

tell us please what should we do
take up arms? or guns eschew?

it’s why we weep in deep despair,
pray for grace and gasp for air

© 2022 Susan Macaulay. I invite you to share my poetry and posts widely, but please do not reprint, reblog or copy and paste them in their entirety without my permission. Thank you.