Then, at about 6 p.m., the sky miraculously cleared. All of a sudden, there wasn’t a cloud in it. Spectacular blue from one horizon to the other as if there had never been nor would there ever be such a thing as precipitation.

To ride or not to ride? I debated.

I had planned on making ratatouille with the organic zucchini, onions and tomatoes from Indian Creek Orchard Gardens. It was suppertime already and I still hadn’t begun to cook. The debate was rather short to be honest. The road and the sun won.

I geared up and was on my ride at the end of the drive by 6:45, having done all my usual pre-ride checks. I expected it to be humid, but the air was fresh and cool compared to what it had been. I rode 10 blocks to Francis Fuels and gassed up. Talked to Kenny the attendant about my new O-ring chain and the cracked crash (aka highway) bars that continue to make the clanging sound that had mistakenly been attributed to the old chain. New crash bars on order. I hope they come soon because the clanging is driving me mad.

As I was on that side of town, I decided on a slow roll through the country on Golden Line where the speed limit is 60 kph. Good choice. I didn’t see a vehicle for 15 kilometres as I dillydallied down the road. I adore having a space to myself.

I turned right onto Dwyer Hill Road and then right again at the four-way stop where the military whatever-it-is is on the corner. Stopped just past Prospect to take this pic of the sky sweeping itself: 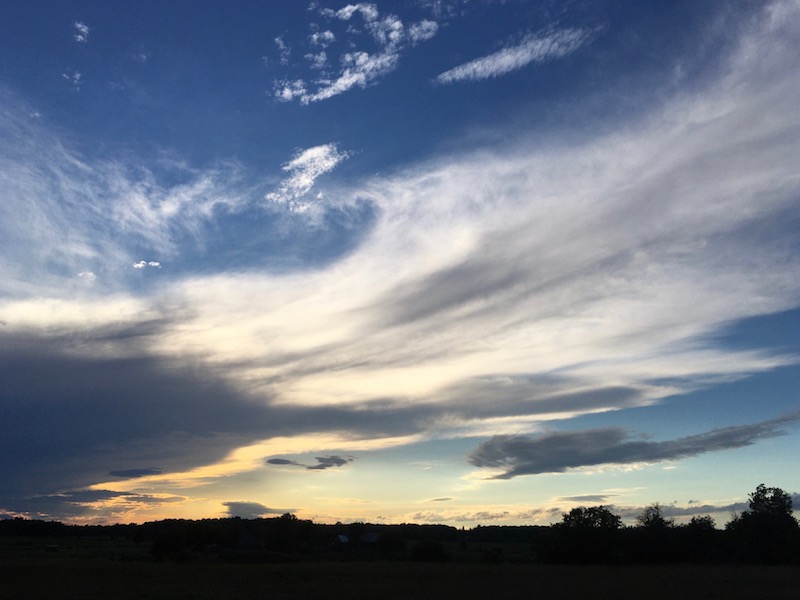 Turned right again onto Lanark 17, which eventually becomes the Appleton Side Road of the deliciously long curves on which a Harley rider once waved to me in passing. I pulled over to take a couple more pictures of the sky (one of which is at the very top of this page, the other directly below). I like that they both have telephone wires in them. 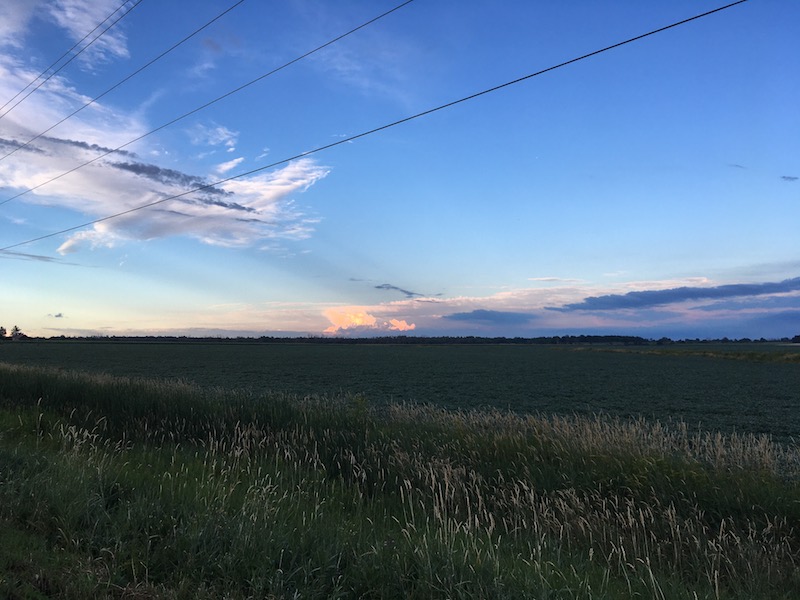 I got home around 8:15 p.m. as the skies were once again growing ominously dark. By 8:45 I was listening to thunder claps while eating leftover shrimp salad instead of ratatouille.

Now it’s an hour before midnight. The thunder, lightening and heavy rain have persisted for the past two and a half hours.

© 2022 Susan Macaulay. I invite you to share my poetry and posts widely, but please do not reprint, reblog or copy and paste them in their entirety without my permission. Thank you.